Introduction: Silver nanoparticles (AgNPs) have a broad spectrum of uses, therefore, AgNPs will release from those products into many different ecosystems. In the last decades, AgNPs have received substantial attention due to their distinctive physical and chemical properties such as high thermal and electrical conductivity, chemical stability, catalytic activity and antimicrobial properties against microbes such as bacteria, fungi, and virus. There are many parameters for assessment effect of toxicity due to AgNPs but The soil microbial community one of which considered being an important target for assessing the impact of manufactured nanomaterials on the terrestrial environment. Toxicity specific to AgNPs are due to the physical interaction of AgNPs with microorganisms and the production of reactive oxygen species (ROS). Those distinct properties take AgNPs to the top of the priority list, to be used in inks, in electronics, and for medical purposes. Although as we have been known harmful effects of AgNPs on the soil bacterial community, but the most information about antimicrobial properties of AgNPs come from the routine lab instructions such as soil respiration, substrate induced respiration and microbial biomass and colony forming unite. So the objective of this paper was to look at effects of silver nanoparticles on microbial activity using the routine lab instructions and compare with the data obtained from the molecular genetic techniques. In this paper, the quantitate population of soil bacterial was estimated using Real time qPCR with the MIQE guidelines.

Material and Methods: In order to study the effect of silver nanoparticles on microbial activity and bacterial population in a calcareous soil, an experiment was conducted as a completely randomized design with factorial arrangement with three replications. Experimental factors include, silver slat forms (AgNPs and AgNO3), Ag concentrations (0, 0.5, 5, 10, 50 and 100 mg Ag kg-1 dry soil) and incubation time (7 and 42 days). Soil samples (Typic Haplicambids) with clay loam texture and 7 percent of calcium carbonate was collected from Research field of Ferdowsi University of Mashhad, Mashhad, Khorasan Razavi, Iran. Then soil samples were amended with different concentrations of AgNPs and incubated at 25 oC for 42 days. The water content of soil samples adjusted at 70% WHC during the incubation time. After 7 and 42 days of incubation, the soil substrate-induced respiration (SIR), heterotrophic plate count (HPC), soil urease and dehydrogenase activities were measured. Finally based the obtained data, the soil biological quality index estimated using the soil biological parameters. In order that quantify the total bacterial population, DNA was extracted from soil samples at was estimated using the relative concentration of 16S rDNA gene by a quantitative Polymerase Chain Reaction (qPCR), with a minimum information for publication of quantitative real-time PCR experiments (MIQE) guidelines.
Results and Discussion: The results showed that with increasing the concentration of both AgNPs and AgNO3, the activity of dehydrogenase and urease in soil samples decreased during the incubation times. Microbial substrate induced respiration (SIR) and the total bacterial population in soil samples considerably declined at the end of experiment. Bacterial population in AgNPs treatments decreased compare to AgNO3 treatments but the reduction was not statistically significant. Over time, soil dehydrogenase activity and soil SIR decreased in both AgNPs and AgNO3 treatments, while soil urease activity and heterotrophic bacterial populations improved but again in heterotrophic bacterial populations was not statistically significant. The soil biological quality index was estimated from the soil biological data. The results showed that AgNO3 treatments reduced the soil biological quality index compare to AgNPs treatments. In the other word, the results showed that AgNO3 was more toxic to soil bacteria activity compare to AgNPs. The lowest soil urease and dehydrogenase enzyme activity and soil biological quality index ware observed in the treatment of 100 mg kg-1 dry soil AgNO3 after 7 days of incubation. The results showed that the application of 0.5, 5, 10, 50 and 100 mg Ag kg-1 dry soil AgNO3 and AgNP respectively decreased (22%,40%, 59%, 73% and 82%), (10%, 30%, 68%, 76% and 86%) Relative soil bacterial population compared to control after 42 days of incubation.
Conclusion: The results of this study showed that silver nanoparticles can negatively affect the enzymes involved in the nitrogen and carbon cycle. The results showed that the AgNPs had less toxicity effect on the soil microbial activity compare to AgNO3. But AgNPs was more toxic to soil bacteria populations compare to AgNO3. Different behavior AgNPs and AgNO3 in calcareous soil need to study more but No doubt AgNPs is as an emerging contaminant and it has high toxicity potential for soil microbial community. 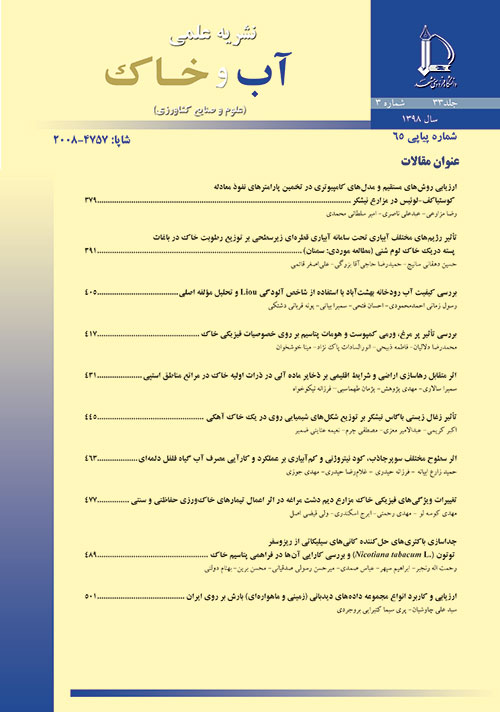