Introduction: Understanding the spatial distribution of soil organic carbon (SOC) is one of the practical tools in determining sustainable land management strategies. Over the past two decades, the use of data mining approaches in spatial modeling of soil organic carbon using machine learning techniques to investigate the amount of carbon to soil using remote sensing data has been widely considered. Accordingly, the aim of this study was to investigate the feasibility of estimating soil organic matter using satellite imagery and to assess the ability of spectral and terrestrial data to model the amount of soil organic matter.
Materials and Methods: The study area is located in Lorestan province, and Sarab Changai area. This area has hot and dry summers and cold and wet winters and the wet season starts in November and ends in May. A total of 156 samples of surface soil (0-30 cm) were collected using random sampling pattern. Data were categorized into two categories: 80% (117 points) for training and 20% (29 points) for validation. Three machine learning algorithms including Random Forest (RF), Cubist, and Partial least squares regression (PLSR) were used to prepare the organic soil carbon map. In the present study, auxiliary variables for predicting SOC included bands related to Lands 8 OLI measurement images, and in order to reduce the volume of data, the principle component analysis method (PCA) was used to select the features that have the greatest impact on quality.
Results and Discussion: The results of descriptive statistics showed that soil organic carbon from 0.02 to 2.34% with an average of 0.56 and a coefficient of variation of 69.64% according to the Wilding standard was located in a high variability class (0.35). According to the average amount of soil organic carbon, it can be said that the amount of soil organic carbon in the region is low. At the same time, the high value of organic carbon change coefficient confirms its high spatial variability in the study area. These drastic changes can be attributed to land use change, land management, and other environmental elements in the study area. In other words, the low level of soil organic carbon can be attributed to the collection of plant debris and their non-return to the soil. Another factor in reducing the amount of organic carbon is land use change, which mainly has a negative impact on soil quality and yield. In general, land use, tillage operations, intensity and frequency of cultivation, plowing, fertilizing, type of crop, are effective in reducing and increasing the amount of soil organic carbon. Based on the analysis of effective auxiliary variables in predicting soil organic carbon, based on the principle component analysis for remote sensing data, it led to the selection of 4 auxiliary variables TSAVI, RVI, Band10, and Band11 as the most effective environmental factors. Comparison of different estimation approaches showed that the random forest model with the values of coefficient of determination (R2), root mean square error (RMSE) and mean square error (MSE) of 0.74, 0.17, and 0.02, respectively, was the best performance ratio another study used to estimate the organic carbon content of surface soil in the study area.
Conclusion: In this study, considering the importance of soil organic carbon, the efficiency of three different digital mapping models to prepare soil organic carbon map in Khorramabad plain soils was evaluated. The results showed that auxiliary variables such as TSAVI, RVI, Band 10, and Band11 are the most important variables in estimating soil organic carbon in this area. The wide range of soil organic carbon changes can be affected by land use and farmers' managerial behaviors. Also, the results indicated that different models had different accuracy in estimating soil organic carbon and the random forest model was superior to the other models. On the other hand, it can be said that the use of remote sensing and satellite imagery can overcome the limitations of traditional methods and be used as a suitable alternative to study carbon to soil changes with the possibility of displaying results at different time and space scales. Due to the determination of soil organic carbon content and their spatial distribution throughout the region, the present results can be a scientific basis as well as a suitable database and data for the implementation of any field operations, management of agricultural inputs, and any study in sustainable agriculture with soil properties in this area. In general, the results of this study indicated the ability of remote sensing techniques and random forest learning model in simultaneous estimation of soil organic carbon location. Therefore, this method can be used as an alternative to conventional laboratory methods in determining some soil characteristics, including organic carbon. 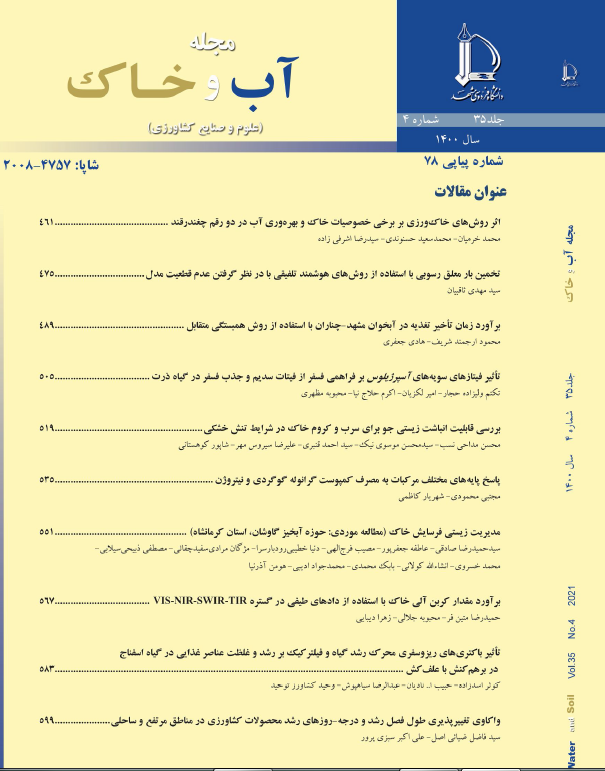