Introduction: Soil erosion and sediment transportation decrease water resources, and cause many social and economic problems. On the other hand, sediment transportation by rivers causes problems such as water quality degradation, reservoirs sedimentation, redirect of rivers, or decrease in their transportability. Therefore, finding the proper methods in sediment yield study in watersheds is essential in planning and management of land and water resources.  Climatic characteristics, physiography, geology, and hydrology of basins are the most effective factors in producing and transporting sediments according to several sources, but the role and impact of some factors are more pronounced than the others in different areas. As a result, the objective of this study was to investigate and identify the most important climatic, physiographic, geological, and hydrological factors in several watersheds of the northeastern part of Iran, by applying Gamma Test (GT) and principal component analysis (PCA) techniques.
Materials and Methods: In this study, the data of discharge flow and suspended sediment concentration, and daily flow discharge recorded in 15 hydrometric stations in Mashhad and Neyshbour restricts and required maps were provided from the Regional Water Company of Khorasan Razavi, Iran. After drawing statistical bar graph period of suspended sediment, daily discharge, annual precipitation, and relatively adequate data, stations with the longest period and with the lowest deficit data were selected to determine the common statistical periods. Therefore, in this study, the time period of 1983-1984 to 2011-2012 was selected, and the run test was applied to control data quality and homogeneity. Then, the most effective factors of sediment yield were determined by principal component analysis (PCA) and Gamma Test (GT).
Results and Discussion: The results of the principal component analysis showed that 90 percent of the first five components justify the changes. Among the factors, area and gross gradient of the mainstream from the first component, the average annual flow rate of mainstream, meandering waterways of the mainstream from second component, and drainage density of third component were identified as the most important influencing factors on suspended sediment production. Ninety superior combinations of 1500 proposed combinations were obtained by Gamma Test to evaluate the effects of each parameter on suspended sediment yield. To determine the order of importance of the entered parameters, first, Gamma Test was performed on all 12 parameters. Gamma values of all cases for each proposed combination were compared. The results showed that the impact of these statistics was lowered by eliminating high gamma parameters and the removal of low values. The data analysis revealed that the low levels of gamma and high accuracy of ratio to find the desired outputs from entries. By lowering the gradient, the complexity of the model was lowered and more suitable model was provided. As a result, high levels of gradient represented the complexity of the final model. The results of the percentage values of each of the 12 variables were considered among the superior equations for estimating the suspended sediment composition. In this regard, the mean annual discharge, main channel length, area, average annual rainfall, and percentage of the outcrop of erosion sensitive rocks with a total of 63 percent of the proposed equations were the most important factors affecting the sediment yield in the study area. The average height parameter of area, the average and gross slope of the mainstream had the lowest presence among the optimized compounds.
Conclusion: Based on the results of the principal component analysis, the two factors of basin area and gross slope of the mainstream were selected as the most important factors affecting the amount of annual suspended sediment load, respectively. Based on the results of the Gamma Test, 12 main variables affecting suspended sediment load were identified and the effect of each of them on the production and transport of suspended sediment was determined. Based on the comparison of the results of the two methods of PCA and GT, it can be concluded that if the purpose of research or study is to prepare a model with the highest accuracy in estimating suspended sediment load, the 12-variable model of GT includes factors related to physiographical, geological, climatic and hydrological factors are suggested. However, if the preparation of a model with appropriate accuracy and a limited number of input variables is considered, a 5-variable model derived from the PCA method is proposed. At the same time, if the purpose is to prepare a model with the least input variables and their easy access and calculation and initial estimation of suspended sediments, a bivariate model (based on basin area and gross slope of the mainstream factors) resulting from PCA is proposed. According to the results of the present study, it can be concluded that the study of more parameters has provided grounds for evaluating their importance in sediment yield. Finally, due to the correlation of many parameters with each other, a limited number of parameters that have a more important role in suspended sediment estimation, were selected. Another finding of this study is the increase in the accuracy of the sediment model’s preparation due to achieving more important and effective parameters in sediment yield and identifying them in order to investigate the best sediment management measures in watersheds. It is suggested that similar research should be done in other watersheds with different conditions in terms of climatic conditions, topography, geology, and so on. 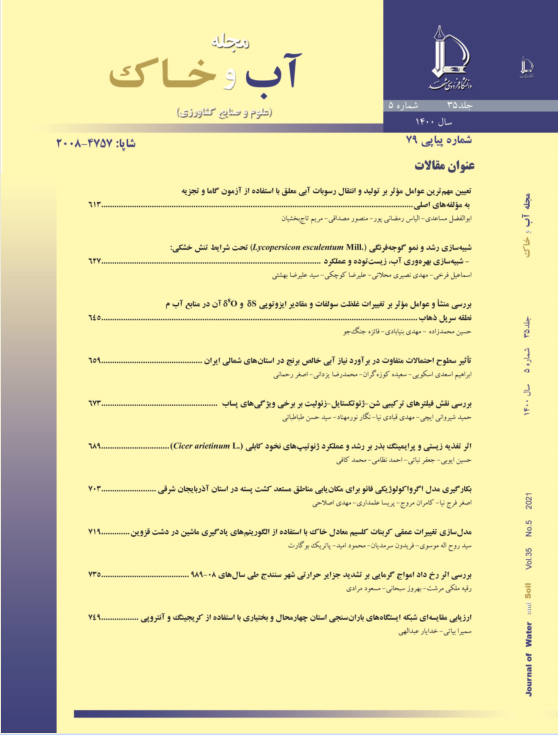